Health and wellbeing are important. Fortunately, there are a variety of tests available to help us know exactly what’s going on in our body, even inside our mouth. At Cornelius Dental Clinic we offer many of these tests, including digital radiography.

What Digital Radiography Is 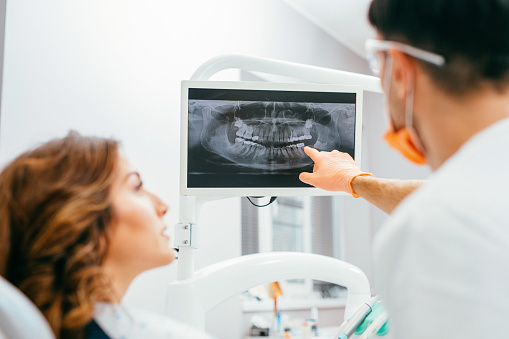 Digital radiography is a type of x-ray imagery that utilizes digital sensors rather than a traditional photographic film that was used in the past. This is a practice that first started in 1977 and introduced into use within dental offices starting in 1980. The real turning point happened in 1987 though. This was when Fuji developed and sold their first computerized radiography system (CR), spurring the transition towards digital radiography. At the time this was an entirely new technology, but eventually, it was so easily and readily adopted that it replaced analog film. This is because dentists saw that it produced enhanced images of your teeth, gums, and any conditions affecting them.Digital radiography works by using x-ray sensors in the imaging instead of using the traditional, photographic film. This film was replaced with flat panel detectors (FPDs). There are two types of FPDs – direct and indirect. The main difference between the two is that direct FPD turns the electronic photons directly into a charge.Besides there being two types of FPDs, there are also two types of x-rays we may choose to take of your mouth when you visit our office – intraoral (inside the mouth) or extraoral (outside the mouth). With intraoral x-rays, you’ll bite down on a piece of film. Two common examples of intraoral x-rays are what’s known as a bitewing x-ray and a periapical (limited) x-ray which is often taken of the crown, root tips, or supporting bone structure of your teeth.Extraoral x-rays are used for a different purpose than intraoral x-rays. Typically, these include sialography, multi-slice computed tomography (MCT), panoramic (panorex), cephalometric projections, and cone beam computerized tomography (CBCT).

There are many great advantages here. For instance, in the past, we’d have to wait for the x-ray film to develop, but with digital radiography, we now have a way in which to immediately process and review your mouth’s x-rays. All this while you also receive 70% less exposure to radiation, which is also something that radiographers benefit from because they’re not spending time enclosed in a room that contains toxic chemicals while developing your x-rays.Additionally, digital radiography takes much less time than traditional radiography. Processing, transferring, and enhancing your images is now faster than ever. This means we now know what your issues are and how to address them immediately. It also helps that the images are much clearer, so we’ll know for sure what treatment you need and why you need it.Regardless of what type of exam you need or if you need digital radiography, you should call Cornelius Dental Clinic at (971) 317-9323 to schedule a time to come into our office and have your teeth checked.